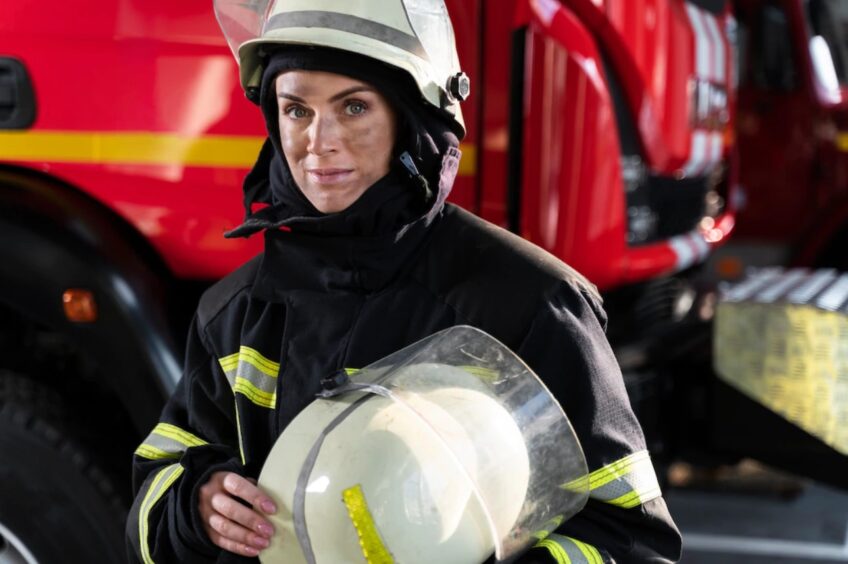 Firefighters put their lives on the line to save people. What many people don’t know is that firefighters may also be facing risk from an entirely different source: the chemicals they encounter on the job. In San Francisco, which has many female firefighters, there is concern about elevated rates of breast cancer, particularly in younger women.

We know surprisingly little about women’s (including firefighters) chemical exposures in the workplace even though these can be much higher than typical exposure levels. To fill this data void, Rachel Morello-Frosch of UC-Berkeley and I, along with a powerful and inspiring group of firefighters, scientists, and advocates, have launched a new biomonitoring study to measure and compare exposures in two groups of women: firefighters and city office workers in San Francisco. The plan to compare exposures of women firefighters and city office workers emerged from firefighters’ concerns about elevated rates of breast cancer among their ranks.

The San Francisco Firefighters Cancer Prevention Foundation, United Fire Service Women, Commonweal Biomonitoring Resource Center, and the Breast Cancer Fund joined forces to respond to concerns about firefighter exposure to potential breast carcinogens. Researchers from UC-Berkeley, Silent Spring Institute, and UCSF were tapped to help try to get to the bottom of what has been going on. The research team includes Rachel Morello-Frosch of UC-Berkeley, Roy Gerona and Michael McMaster of UC San Francisco and myself at Silent Spring Institute. The firefighter community is an integral part of the project. Two firefighters, Tony Stefani and Heather Buren, serve as co-PI’s on the study; and several other firefighters are part of the study team.

This collaboration of researchers, firefighters, and advocates calls itself the Women Firefighters Biomonitoring Collaborative The 3-year study, funded by the California Breast Cancer Research Program, Local 798- International Association of Firefighters, and the San Francisco Firefighters Cancer Prevention Foundation, will specifically target potential breast carcinogens highlighted in a recent review conducted by Silent Spring Institute. This review identifies chemicals that are high-priority for breast cancer research because they cause mammary gland tumors in rodent studies. The review also describes the best methods to measure those exposures in people. We used this new review to hone in specifically on potential breast carcinogens that firefighters are likely to encounter.

Past investigations into workplace exposures to chemicals of interest for breast cancer have had to rely on surveys conducted in the 1970s and 1980s, so the information is out of date and incomplete. Furthermore, most knowledge about chemicals that cause cancer has come from studies of workplace exposures, but since we don’t know what women are exposed to at work, we are missing a major potential source of information about which chemicals cause breast cancer.

Our new study focuses on occupational exposures to chemicals that raise breast cancer concerns. We will collect blood and urine samples from 80 women firefighters and 80 city office workers, in addition to interviewing the women about potential exposure sources at home and work. We will measure levels of specific chemicals, including products of combustion and diesel exhaust, flame retardants, and perfluorinated chemicals. In addition, we will use an innovative method (called Time of Flight) to test for the presence of unanticipated chemical exposures by comparing blood samples from firefighters and office workers. As a result, the project will apply one of the newest tools available for biomonitoring.

We selected these chemicals for the study because we expect firefighters may have higher exposures to some of them, and because they are among the 102 chemicals listed as priorities for breast cancer research and prevention efforts in our new review paper, entitled New Exposure Biomarkers as Tools for Breast Cancer Epidemiology, Biomonitoring, and Prevention: A Systematic Approach Based on Animal Evidence. Our review shows that rodent data is a good predictor of chemicals’ links to human breast cancer, so we prioritized chemicals that cause mammary gland tumors in rodent studies for further study in women workers.

Then we compiled the best methods to measure women’s exposure to the priority chemicals. We found that exposure to these mammary carcinogens can come from many sources, including tobacco smoke, gasoline, diesel exhaust, air pollution, polyurethane foam, flame retardants, drinking water, and pharmaceuticals. We found that methods are currently available to measure about two-thirds of the 102 priority chemicals in people, and US CDC includes 23 of them in the national exposure report.

While human data about breast carcinogens are limited, the Silent Spring study reviews those cases where data are available and finds consistency between the rodent and human data.

This supports using rodent data to predict potential risks to people in order to make good decisions about chemical use and pollution control. This is especially important for breast cancer, which is difficult to study in women because it develops over many years and is influenced by multiple risk factors.

Our review highlights that many mammary gland carcinogens are ubiquitous pollutants to which most women are exposed every day. We hope our review will encourage researchers to include exposure biomarkers for these chemicals in the many ongoing breast cancer studies that have already collected blood and urine from more than a million women. And policy makers can use biomonitoring for these chemicals now to find highly exposed populations where efforts to reduce exposure will have the biggest payoff.

The Silent Spring review and the Women’s Firefighter Biomonitoring Collaborative study respond to recommendations from the Institute of Medicine, International Agency for Research on Cancer, President’s Cancer Panel, and US Interagency Breast Cancer and Environment Research Coordinating Committee to improve breast cancer prevention research by focusing on laboratory evidence and developing new exposure methods and data.